If a tree is planted correctly it will grow twice as fast and live at least twice as long as one that is incorrectly planted. Inadequate soil preparation and improper planting are two frequent causes of plant failure.

If a tree is planted correctly it will grow twice as fast and live at least twice as long as one that is incorrectly planted. Inadequate soil preparation and improper planting are two frequent causes of plant failure.

There is an old saying that states “The best time to plant a tree is yesterday”.   If that didn’t happen, then the ideal planting time is now!   If you plant in the fall you take advantage of the new root growth that occurs during the dormant season. Unlike the tops of the maple that go dormant and cease growth for the winter, roots of maples continue to grow throughout the fall and early winter months if temperatures are not below freezing. Fall planting also allows the carbohydrates that are produced during the summer to be directed to root growth since there is little demand from the top. If you are planting in spring try to avoid disturbing any plant parts that recently have broken bud are is producing new, soft growth.

The placement of your tree can mean the difference between an attractive lush growing maple and a straggly struggling one. With so many cultivars to choose from this should not be a problem as you should be able to match your landscape situation with the right cultivar. Try to match your maple cultivar to your planting location with regards to the amount of sun, wind exposure and space availability the tree will receive. Young trees will need to be protected from the elements until they have formed established roots.

Keep in mind when you place your tree into the landscape that morning sun and afternoon shade will suit most maples best. Wind and hot sun can wipe a small tree out in no time, regardless of the cultivar.  Leaves will show signs of stress with burning on the tips. Sometimes the roots will become sun baked and the stress will show up in the leaves as if there has been too much sun or wind. Maples are thin-barked and can be sun scalded during the first year or two after transplanting. This injury can set the trees growth back considerably.  Most maple species are naturally under story plants, but as gardeners we have forced them into the open landscape.

Most maples do not thrive in clay, heavy or poorly drained soils. These types of soils can lead to root rot and bring about disease.   In addition plants breathe through their roots and these soil types are not suitable for growth because they are low in oxygen required for good root growth.

If your soil is heavy clay, make the planting hole 2 to 4 inches shallower than the root ball. In poorly drained or heavy clay soil, the plant is best placed higher than its original planting depth at about 4 to 6 inches higher than the surrounding soil creating a raised mound.

Poorly drained soils are a leading cause of plant problems in the landscape. It is a good idea to incorporate about 10-20 percent organic matter into the soil to help with drainage and aeration. Use only well-composted mulches.   A quality bag of potting soil mixed in will work just as well. Avoid fine- textured organic matter, such as sand or peat moss. Composted materials immediately provide organic matter to the soil and help with aeration. Do not use green bark products as amendments. Freshly milled bark that has not been composted will slowly rob plants of nitrogen when used as an amendment. As microorganisms in the soil feed on bark and decompose it, they will use nitrogen in the soil. Also, the pH of the soil often drops dramatically below the desirable range when non-composted materials are used as amendments.

Be sure to build the soil up beside the root ball so that the sides are not exposed, and do not place additional soil on top of the root ball. This will allow oxygen to reach the roots in the upper surface of soil. Do not disturb the soil under the root ball to prevent any later settling, which will move the plant roots deeper into the soil.

Planting in containers is a great way to start your maple tree. However, from years of growing maples in containers I have come to learn that Japanese maples prefer to be somewhat snug in a container. If too much soil is allowed to sit around the rootball there is a greater chance of the soil becoming too saturated with water which can lead to root rot. This seems to be particularly true for smaller maples in containers.

So it is best not to use a container that is too big for your tree. As a general rule use a container no larger than twice the diameter of the rootball and half again as deep.   Another way to look at this is not to go more than double the volume of the rootball. As the plant becomes larger, planting in wine barrels or other large containers is a great way to use the maple as an accent on your patio, front porch or backyard.

A mixture of half potting soil and half aged bark is an ideal medium for containers.  Vermiculite or perlite can be substituted for the bark.

After two or three years in a container, your tree will benefit from root pruning and some fresh soil.  The outer layer of roots can be pruned or cut off with a saw or sharp knife. Those long, tangled roots around the edge of the pot are not necessary for the plant’s growth.  Only the root tips take up water and nutrients.  If you are returning the plant to the same pot, remove enough root ends so you can incorporate some soil around the perimeter.  There is no need to disturb the center of the root ball.

Maples that are great for containers 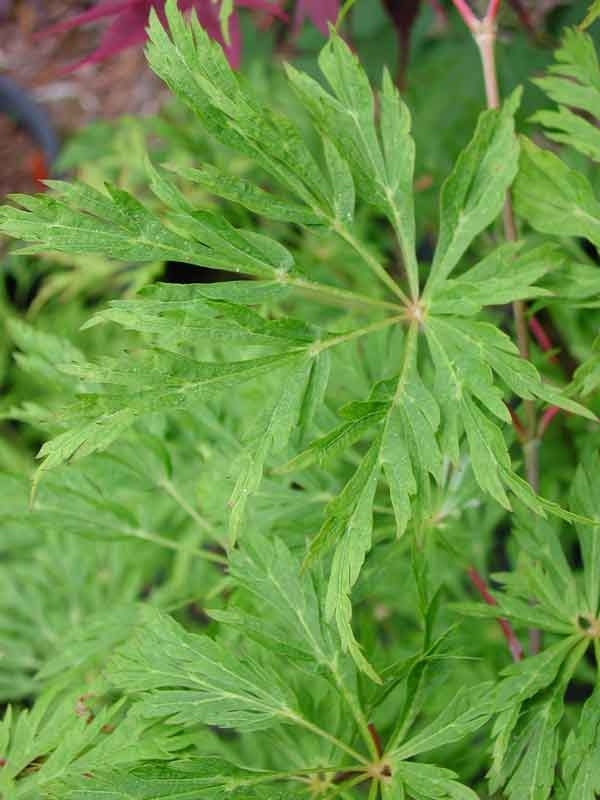 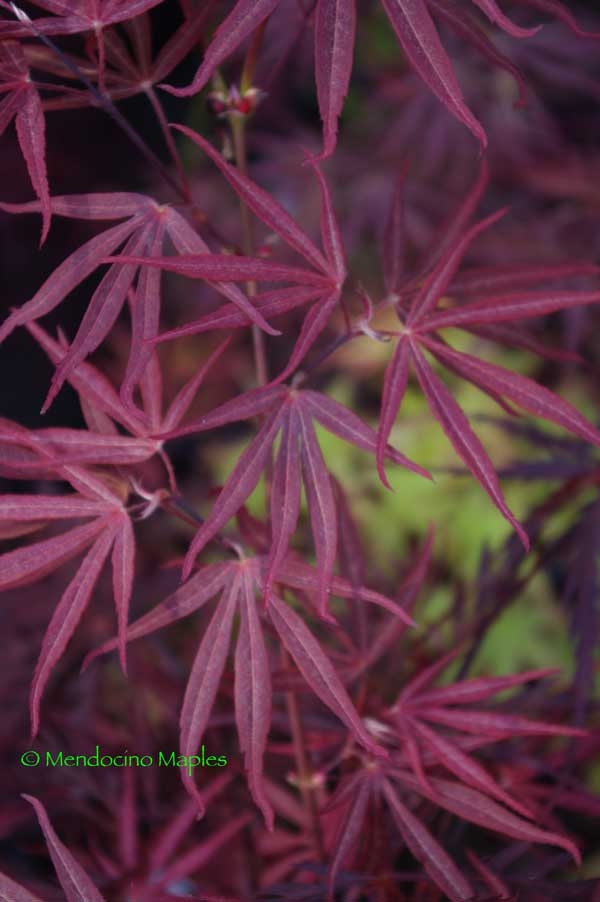 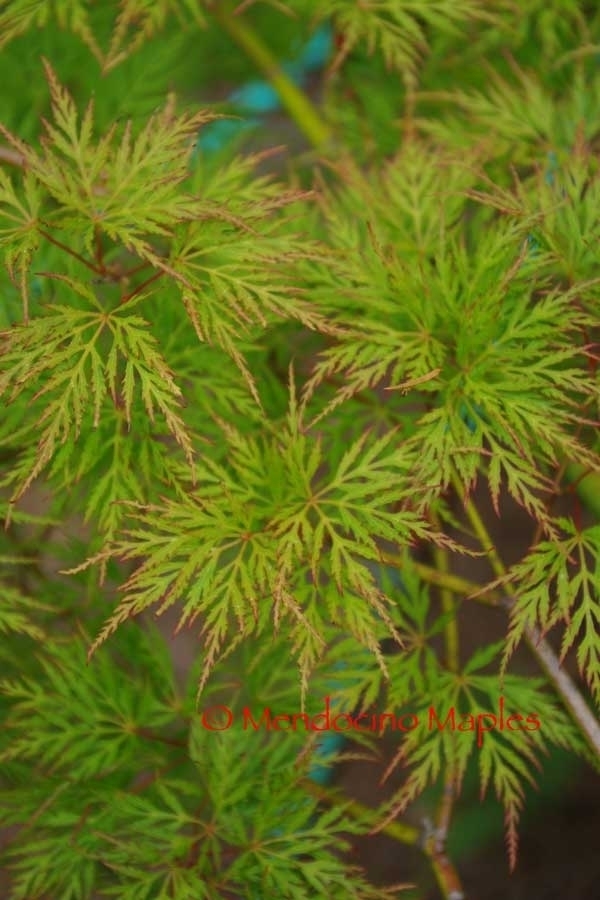 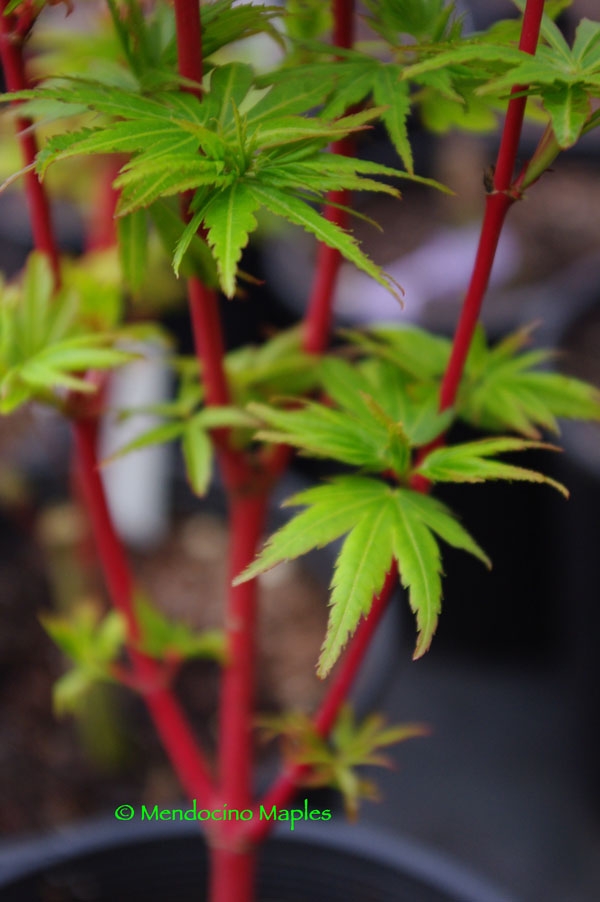 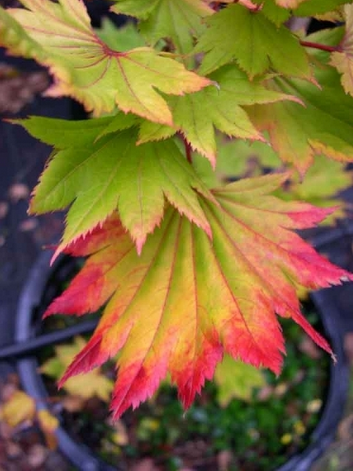 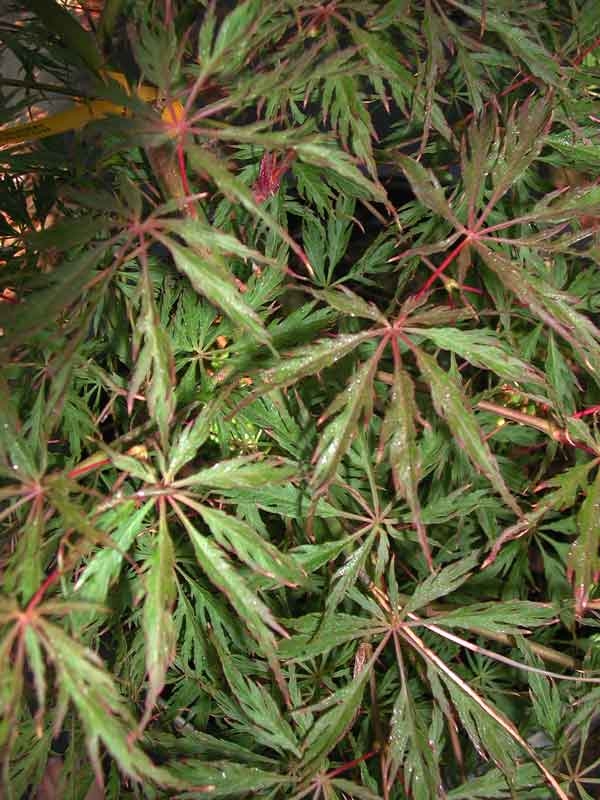 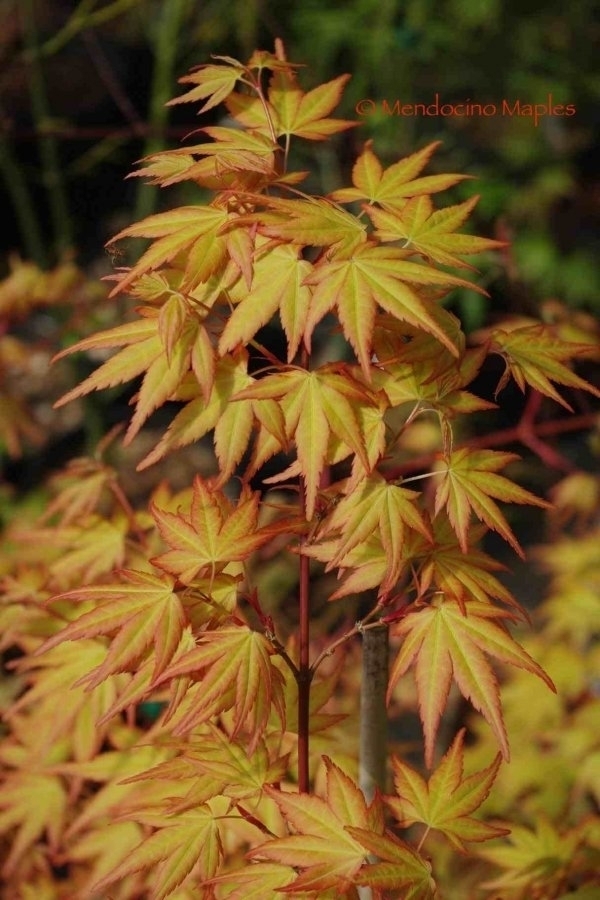 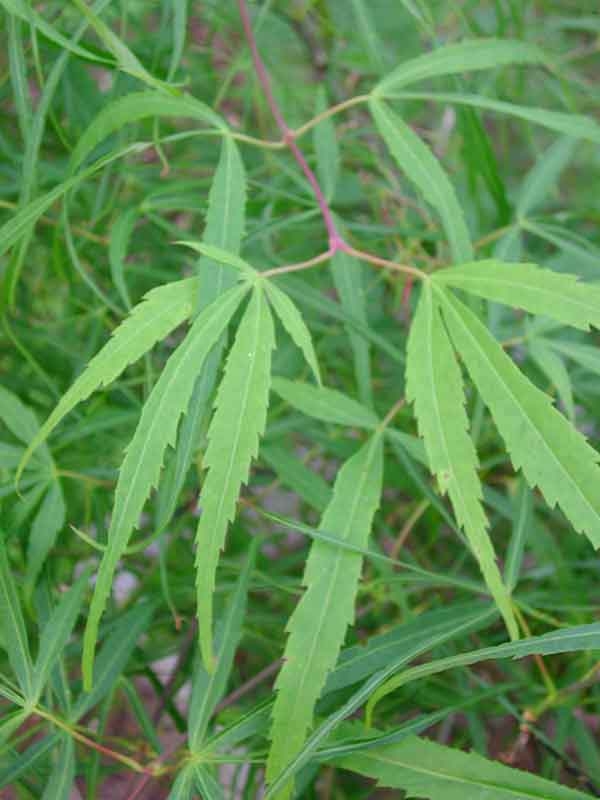 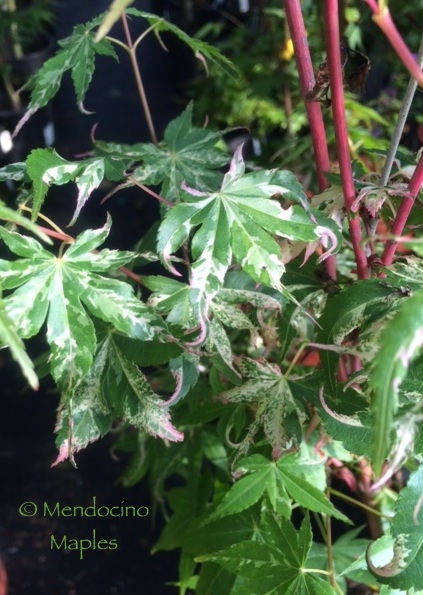 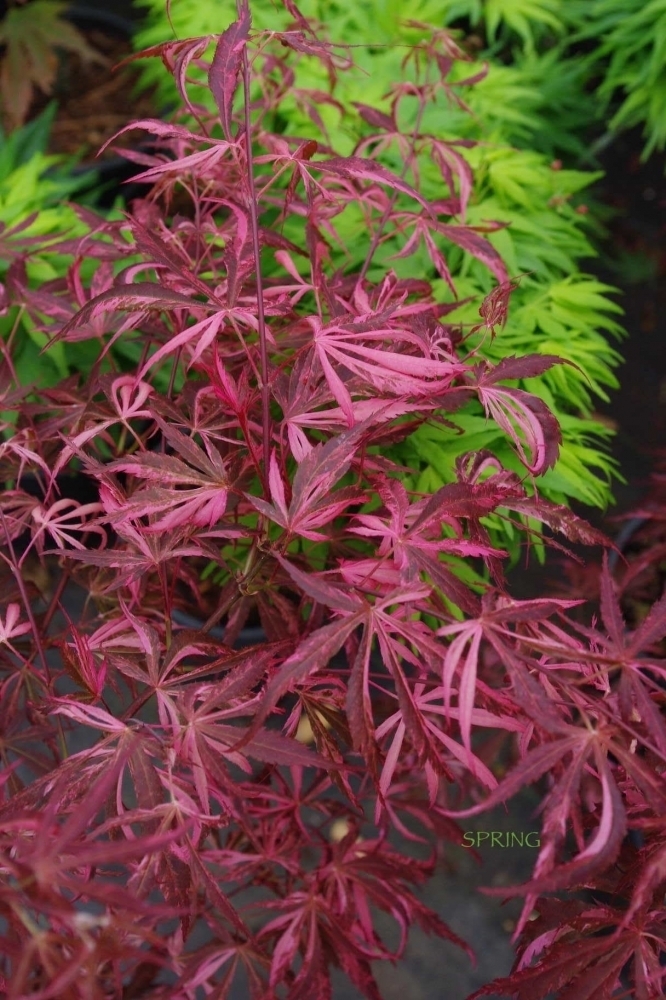 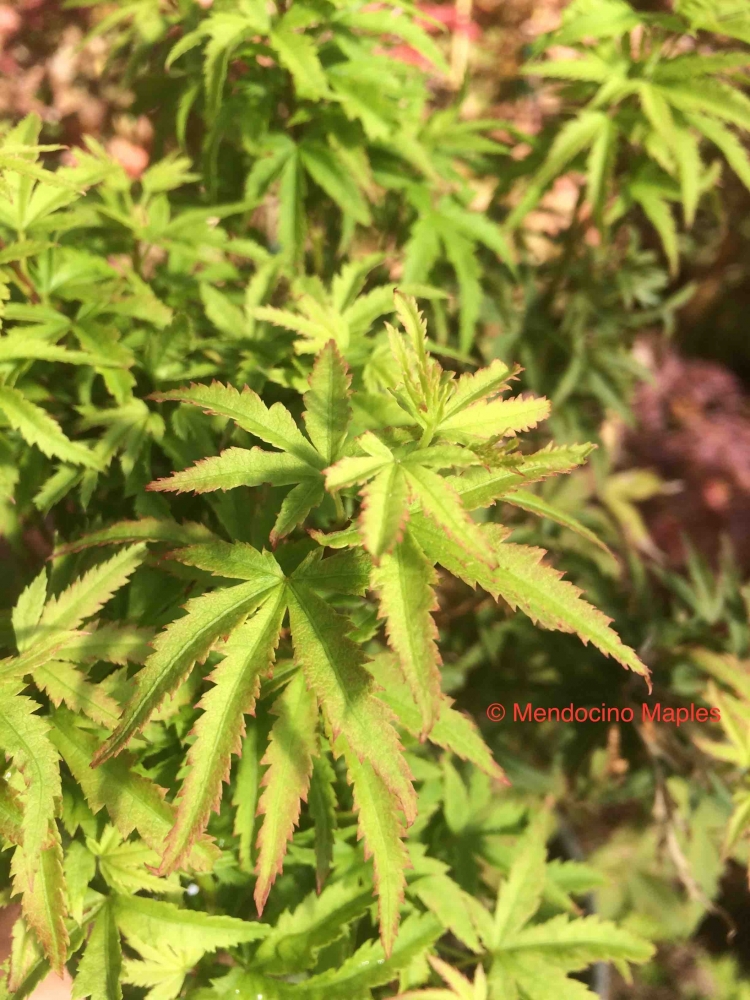 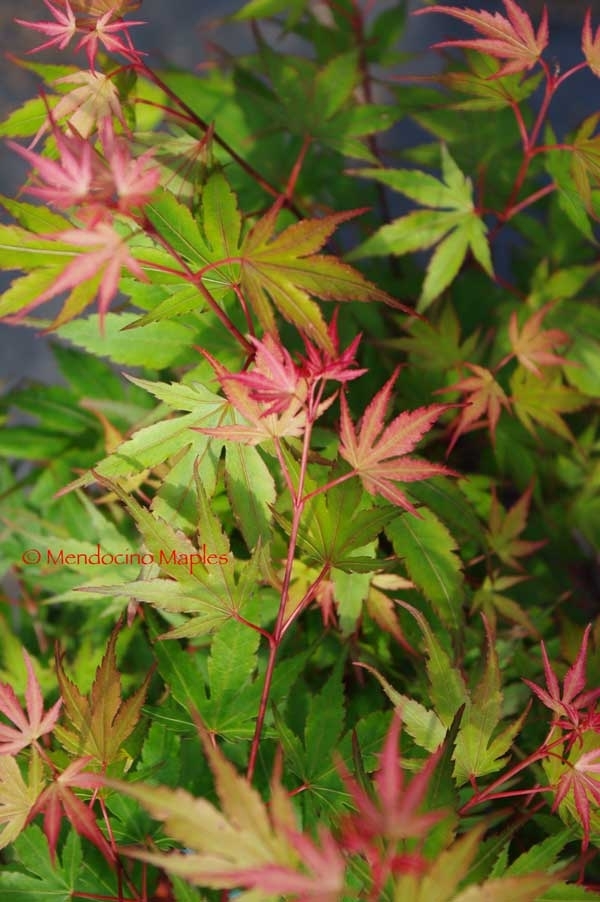 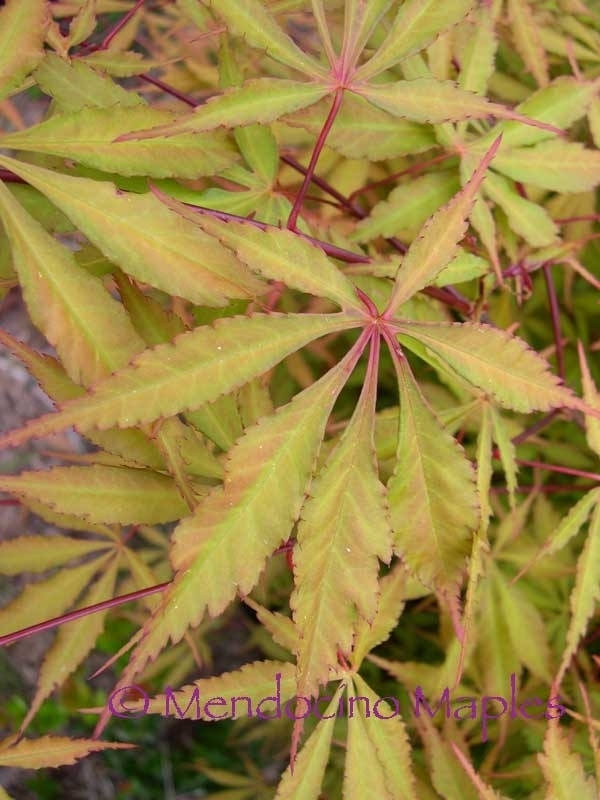 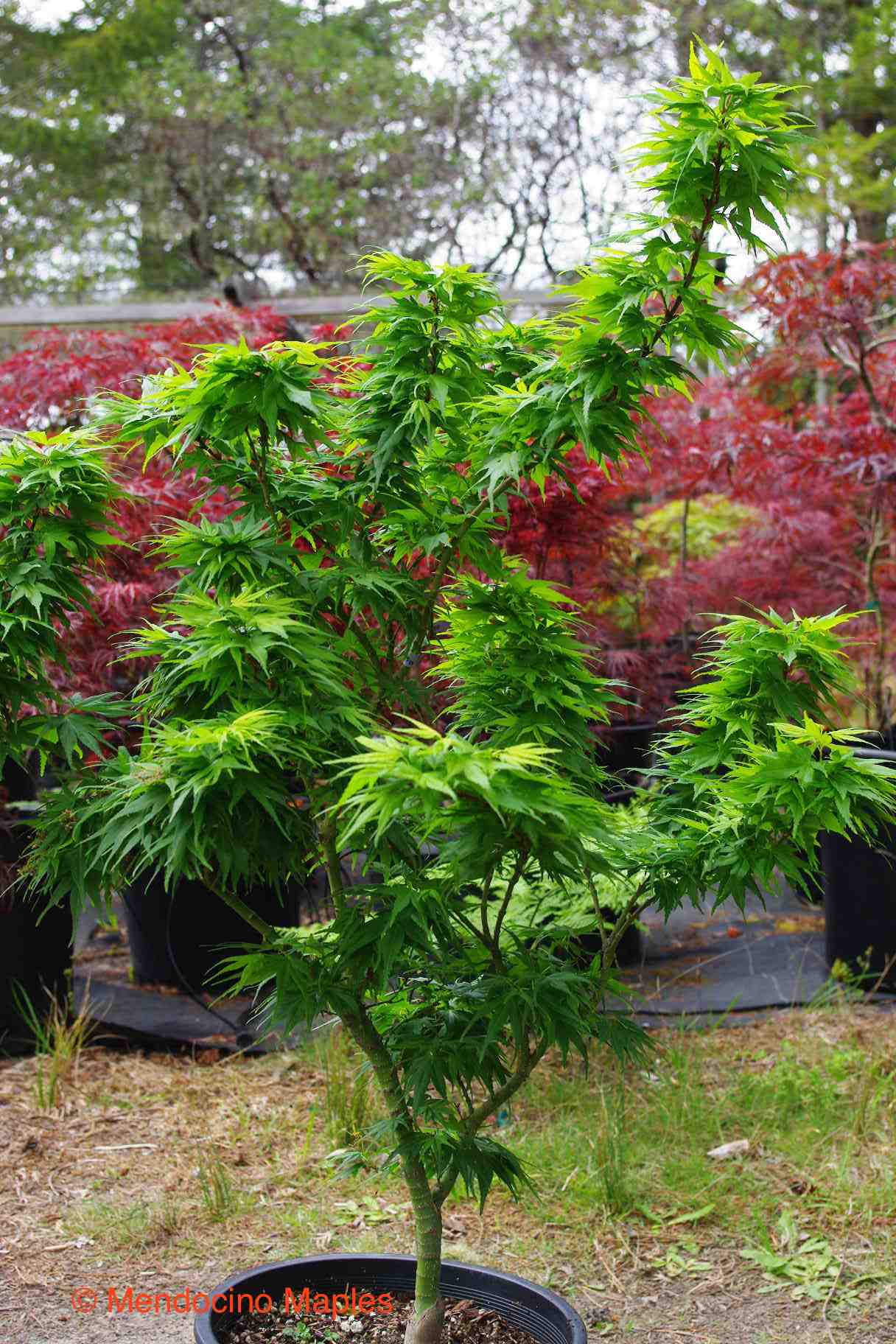 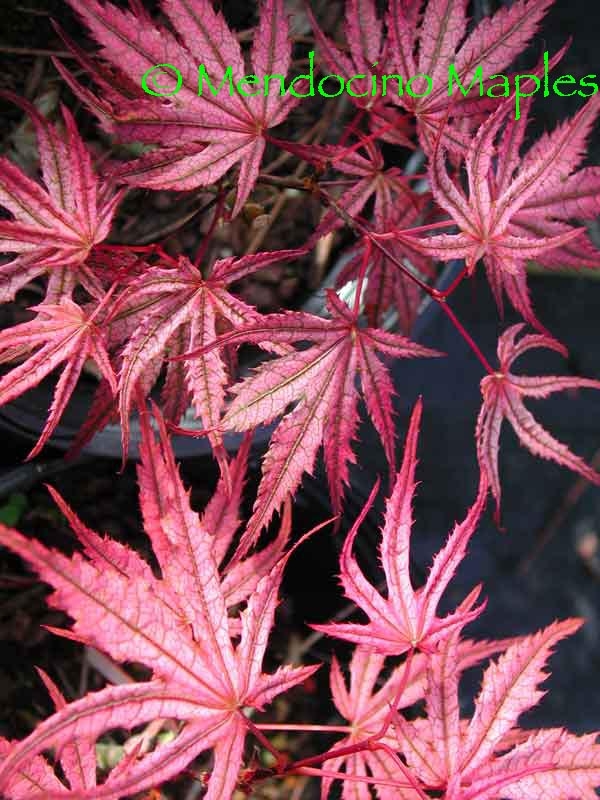 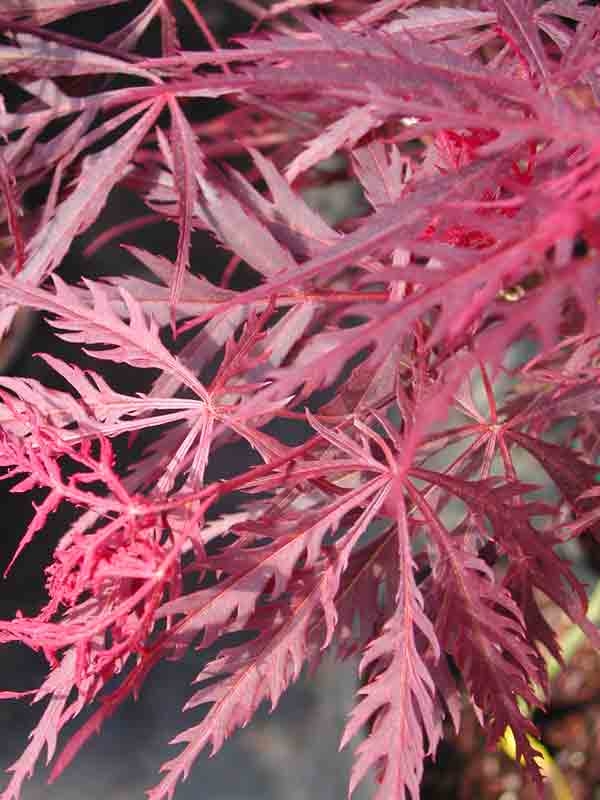 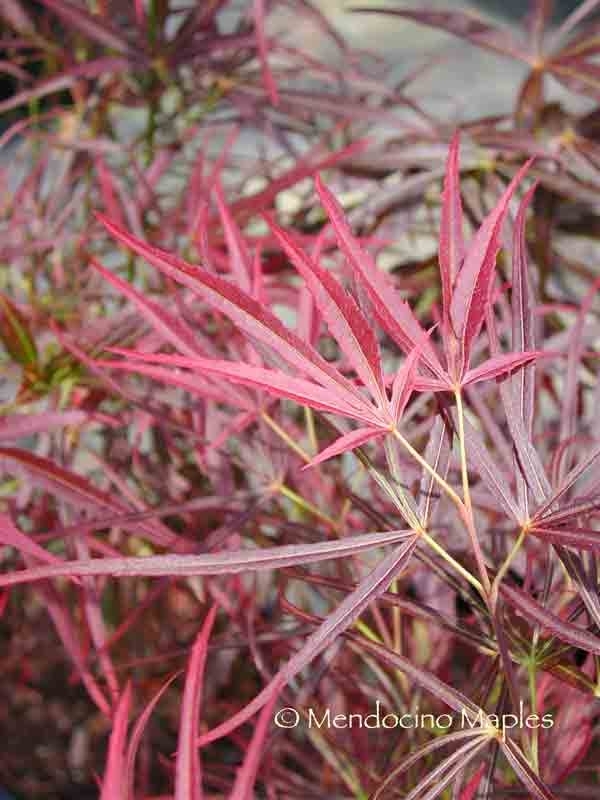 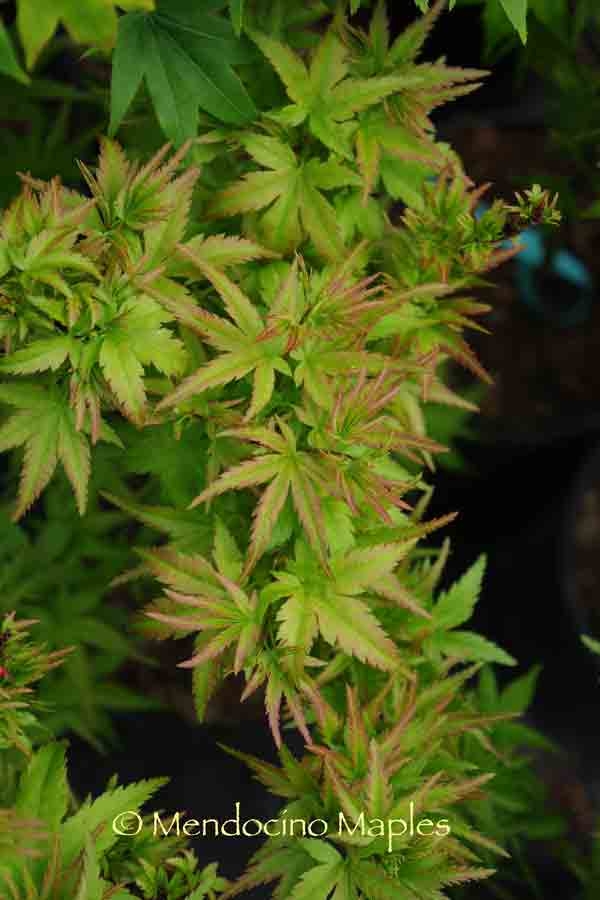 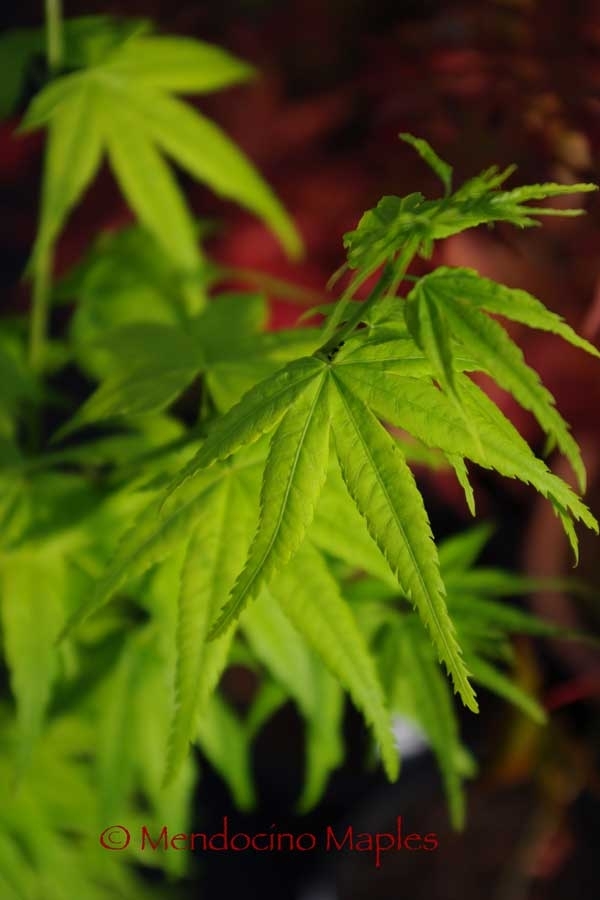 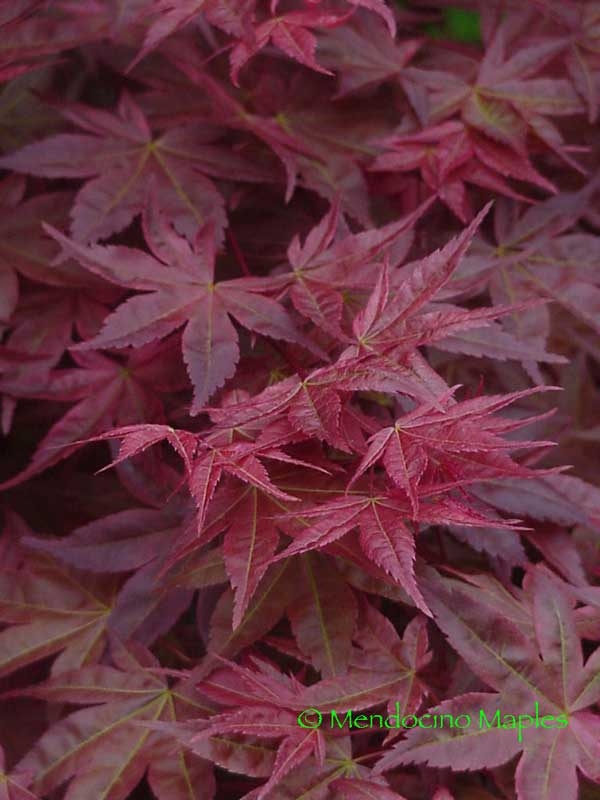 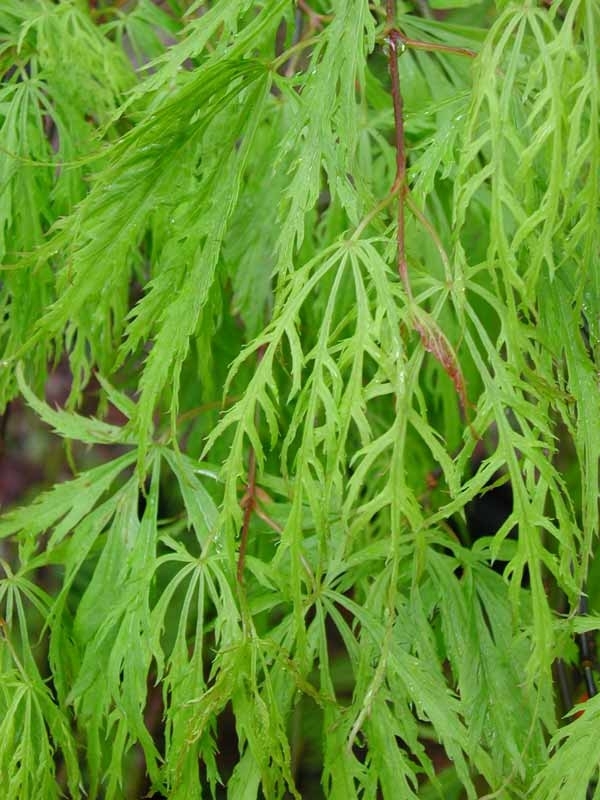 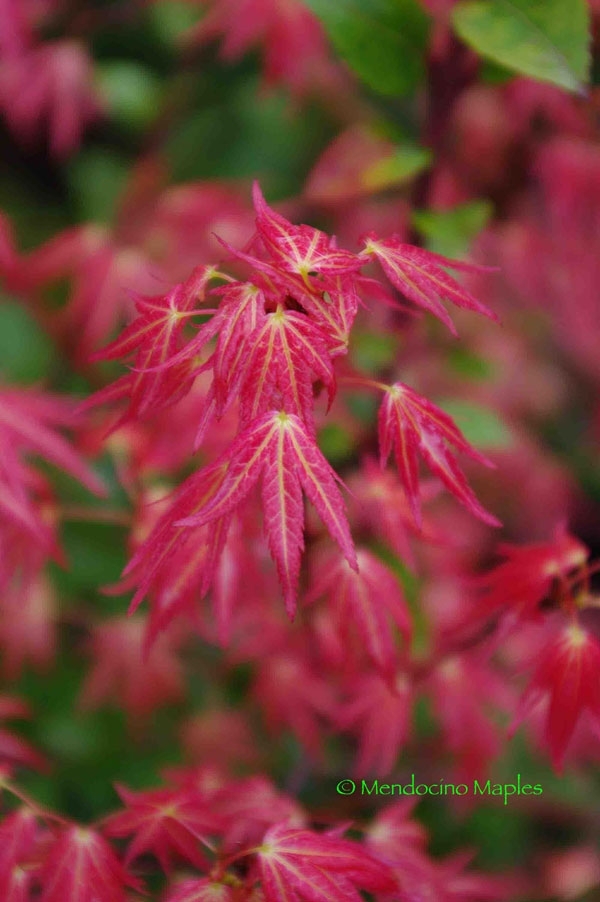 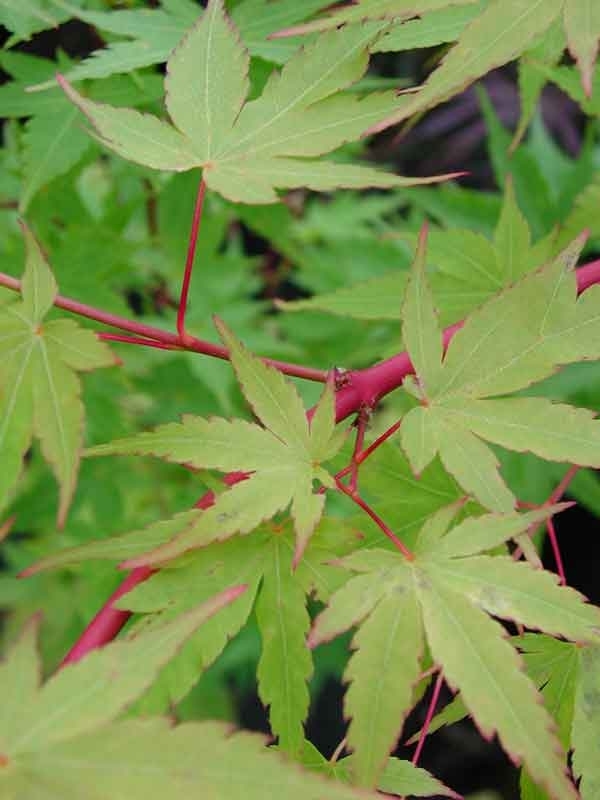 Mulch is a good friend of your maple. Mulch protects the roots from the heat in summer, the cold in winter and reduces the frequency of watering. Apply a loose mulch, such as wood chips or pine needles over the planted area to a depth of 4 to 6 inches. Be sure to keep mulch several inches away from the trunk of the tree.   Be sure to mulch trees in containers.

Everyone wants a bigger tree…now… but it is very easy to add too much fertilizer when trying to make your tree grow to fast and end up damaging your plant. In fact, most maples do not require any fertilizer for healthy growth. When trees are pushed with fertilizer it often invites disease and die back in the stems. Once the maple has established a strong root system it will begin putting on top growth.  This sometimes takes one to two years.

Please be careful with fertilizers!   Mistake number one is to give the maple large amounts of nitrogen in the first and second years. A small amount of organic slow release fertilizer in the spring would be much better for your plants. I have had real good success fertilizing in late April with Fox Farm Japanese Maple fertilizer 4-8-5 and Dr. Earth 5-5-5.

If you are going to use inorganic fertilizers, it is best to fertilize lightly in half dosages rather than full strength..   Water soluble fertilizers such as Miracle Grow seem to work fine…but go lightly.

The timing of when to apply a fertilizer is also very important to keep in mind. Once transplanted it is best to wait and fertilize newly planted trees the second growing season after being planted. This gives the plant plenty of time to adapt to its new conditions.

Never put fertilizers such as dry pellets or fertilizer “spikes” containing nitrogen, when planting a maple in the back fill because root injury may result. Be careful with top dressed granular fertilizers which can sometimes release too much fertilizer at a time and thus cause damage to your tree.

Fall and winter are a common time to prune and shape most deciduous trees and shrubs – exceptions to this are maples because they will bleed or ooze sap.   When maples are pruned in late winter or early spring the wounds may flow with sap. If heavy sap flow occurs, pruning should be delayed until it stops or wait until midsummer. This flow of sap can lead to disease invasion and weakening of the tree. I have found that The preferred time to prune maples is between mid-July and August, a period when sap won’t run from cuts.   The trees should not be pruned is during early spring when buds are breaking during leaf expansion or in late autumn because the wound won’t have enough time to heal before winter conditions of freezing or dampness. Maples should be given a thorough pruning every three years and minor “touch up” pruning annually.   A thorough pruning involves removing dead limbs, crossing branches (or branches that will cross in the future). A certain number of branch tips will have died back and these tips can be snapped off with your fingers, or larger branches cut with a pruning tool.

Remove any shoots growing from the base of the plant whose leaves look different from the rest of the plant.  Maples are grafted onto an understock that in most cases will be more vigorous than the grafted scion.  If left to grow, this shoot will take over and out compete the main tree.

Give newly planted trees and shrubs only minimal pruning. Removing too much top affects the production of food energy (carbohydrates) and can result in poor root development. After planting, prune out broken branches and those with weak or narrow crotches. With young trees, leave some of the lower limbs and sprouts even though they will be removed later. These limbs provide the closest source of food energy for root development. I have also found that trees will form a stronger trunk if the lower branches are not trimmed for a few years.  For more information on pruning see the video below:

How to Prune Maples 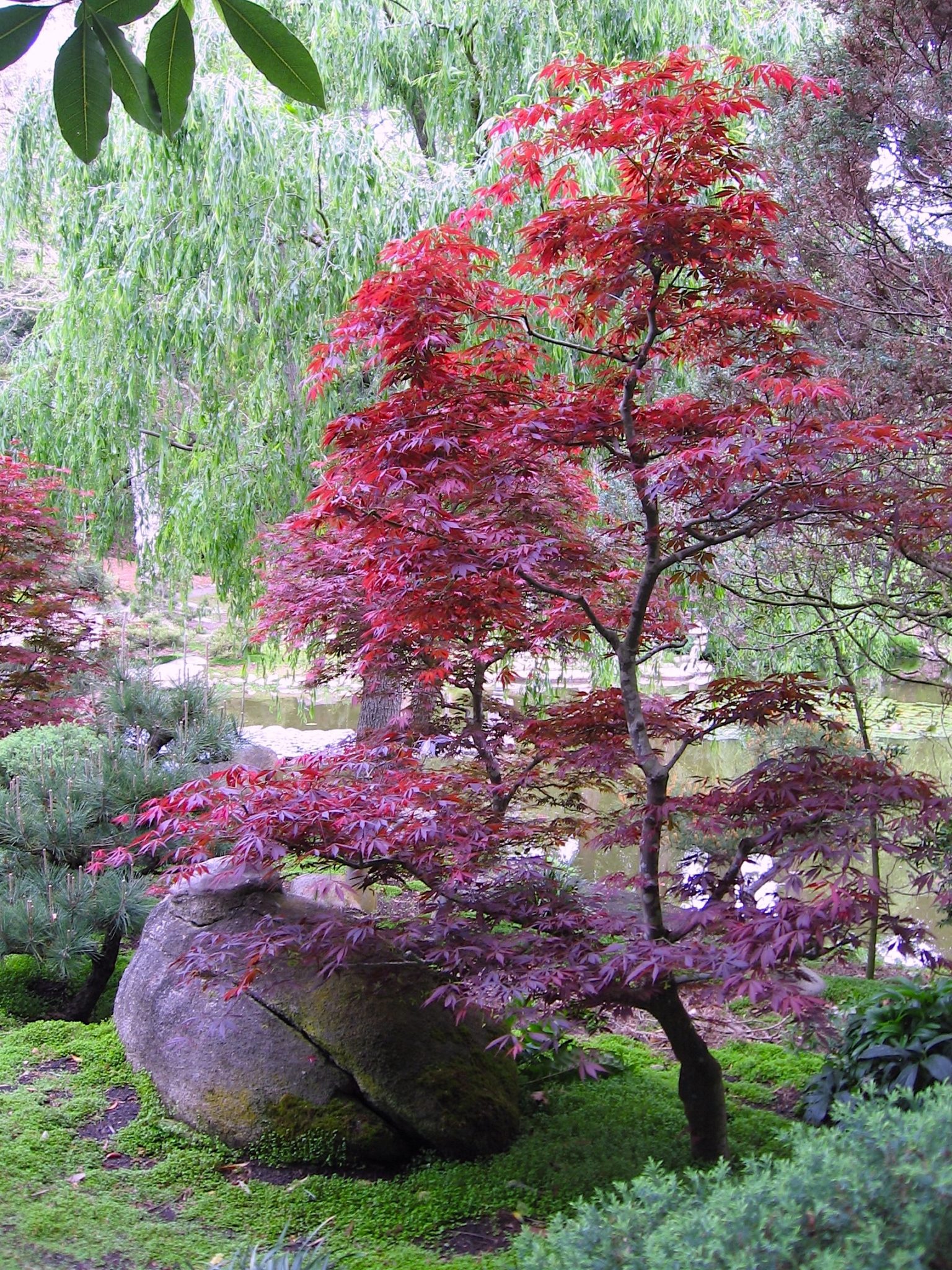 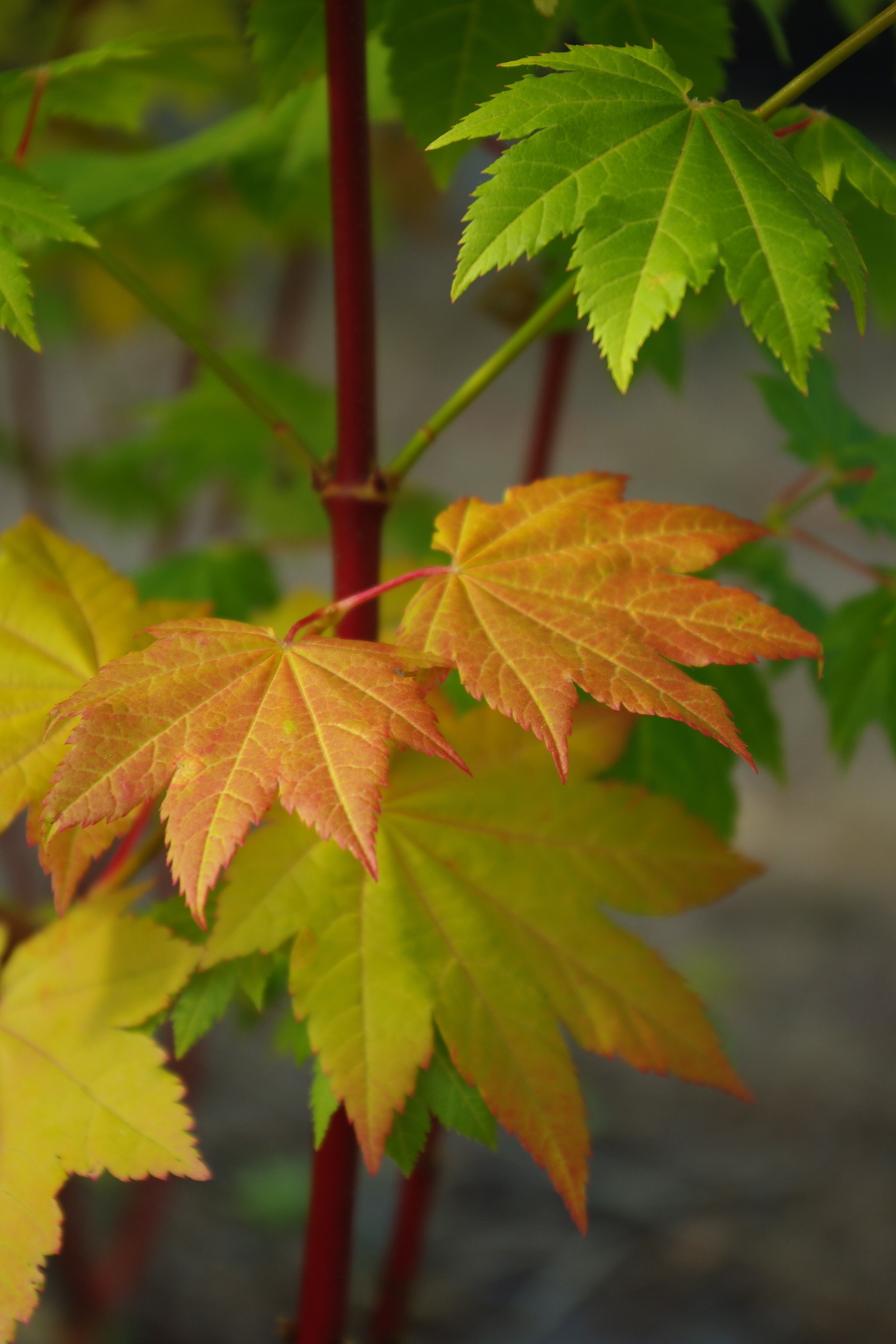 Maples for Hot and Sunny Areas 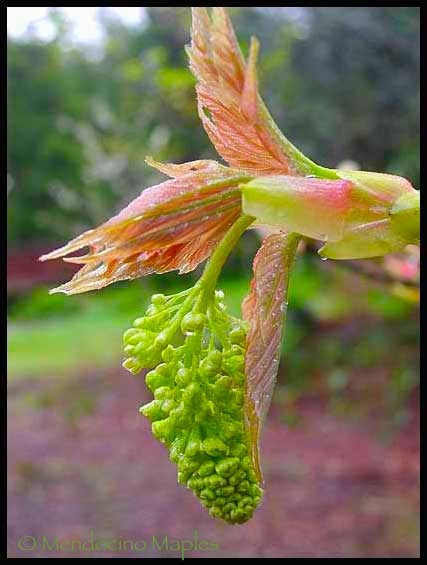 Maples that do Well in Cold Climates 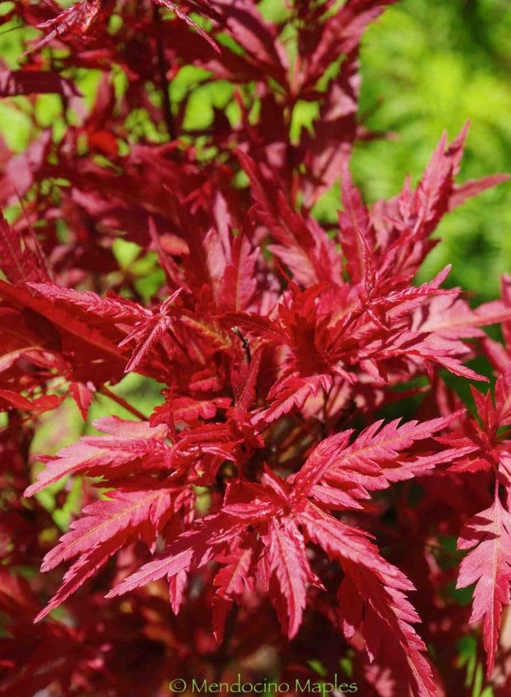